Full-face helmets save motorcyclists' lives after colliding with deer

My first awareness was of spitting into gravel inches from my face and being rather smug that there wasn’t any blood in it. I pushed myself up to my knees, noticing that one of my gloves was torn and full of blood. I pulled it off and shook my hand, trying to fling the blood away. A few yards from me, my wife wept softly, the bones of her left forearm broken and exposed. “That’s not good,” I said, to no one in particular. “That’s not good at all.”

A young man in a Michigan State Police uniform knelt in front of me. “Sir, where were you going? Where were you headed today?

I looked into his face and started grinning—I couldn’t help it. “Damned if I know,” I said. “I know I should know, but I don’t. What happened?”

He jotted something in a small, leather-covered notebook, nodded, and looked back at me. “Sir, where did you spend last night?" 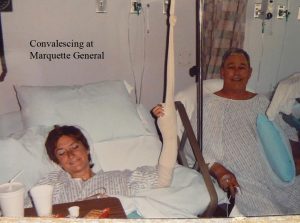 I kept grinning at him. “You got me there, too (can you spell concussion?). What happened?”

“You hit a deer, sir. Medical help is on the way. “I notice that you have a concealed weapons permit in your wallet. Were you carrying a weapon today, sir?”

“Naw,” I said, chuckling at the officer. “Don’t carry it when we go up to Canada. They get all nervous up at the border, you know, and we’re going there later. I do have a 12-gauge shotgun, though, half in each saddlebag: Winchester Model 12; breaks in half real good. You want me to get it? What happened?”

The officer put his hand on my shoulder. “No. We’ll take care of it. Lie easy now. Help is coming.”

“Hey," I said, “that’s my wife there. She’s hurt bad. Let’s put her in your car and take her to the hospital!” I started to rise to my feet, but a deep burning ache began in my side, and then it got worse and didn’t go away. “Ah, Jesus!” I moaned.

The young officer pushed me down, and his voice was urgent now, more commanding. "Sir, lie still! You were in a collision with a deer, and both you and your wife are seriously injured. Ambulances are coming. You can hear them now. Hear them?”

I looked into his face and grinned again. I just couldn’t help it. “East Duluth,” I said triumphantly.

He looked perplexed. “What? What did you just say?”

“East Duluth. That’s where we were last night…motel…East Duluth. Got one right, huh? What happened?”

He smiled at me, I think, and rested his hand on my shoulder again. “Good, that’s real good. Be still now. They’re just pulling up.”

I sank down on my thighs and ankles again and looked up at the fair-weather clouds racing across the Michigan skies, listening to my wife’s gentle weeping and to the oncoming sirens. 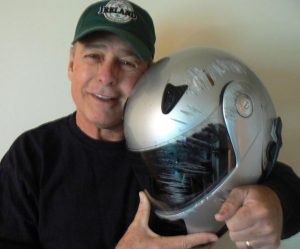 We spent five days in Marquette General, a wonderful facility, where we received the best of care and were treated with the utmost concern.

My wife had a concussion and nearly lost her left hand, and later she lost a tooth due to the accident.

I had a concussion, four broken ribs, and a collapsed lung. I went into shock at Baraga Trauma Center (Baraga County Memorial Hospital, L’Anse, MI) and nearly bought it. That's when they transferred us both to Marquette.

Big ol' deer ya got there in Michigan!

I'm convinced that without helmets, we'd both be dead.

I'm also convinced that without a full-face helmet, I would have needed a new face!