Lane-splitting and lane-sharing refers to the 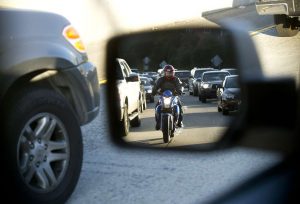 practice of passing slower moving or stopped traffic by riding a motorcycle in the gap between two parallel lanes of traffic heading in the same direction. In some cases, the term “filtering” has been used to specify moving between stationary traffic, while the terms “lane-splitting” and “lane-sharing” have been reserved for riding between traffic in motion (State regulations 3-25-2022) Regardless of name, reports specific to the general practice of motorcyclists riding between either stopped or moving traffic are referenced in this section.  Research specific to this practice is limited.

Additional information can be found in the Research – Crash Causes section, specifically reviewing the research regarding the position or placement of the motorcycle in the moments just prior to the crash.

This is a SMARTER written document that provides an overview of the literature published between 2010 and 2020 that specifically addresses the questions: “Which is higher risk - staying in my lane or splitting/filtering?” and the secondary question “How does the risk change by setting?”

This is an abstract, of the report widely shared in U.S. media with article titles such as French Study Suggests Motorcycle Lane Splitting Can Lead to More Crashes”  The study was conducted in 11 French departments (counties) over a period of five years. The Centre for Studies and Expertise on Risks, Environment, Mobility and Planning (CEREMA) conducted the study.  A “biker” association apparently helped develop the lane-splitting guidelines. The report shows that over the five-year period, motorcycle crashes in the 11 departments where lane-splitting was allowed increased by 12 percent and decreased by 10 percent on roads outside of the testing area.

This is an abstract of a study that investigated the risk of motorcycle crashes while lane-filtering compared with the crash risk associated with motorcycling while not lane-filtering. From video recordings of commute-hour traffic along specific sections of fourteen urban arterials in the Marseilles, researchers calculated the vehicle kilometers traveled (VKT) by lane-splitting and non-lane-splitting motorcyclists.  Results also showed that lane-filtering carries a nearly four-fold increase in crash risk compared to non-filtering motorcycle travel (i.e., riding within the designated traffic lanes).

2015 – “Motorcycle Lane-splitting and Safety in California”

This report is the follow up to “Safety Implications of Lane-splitting Among California Motorcyclists Involved in Collisions.” The report summarizes the analysis of data from the California Enhanced Motorcycle Collision Data Project.  The report is often referred to as the Berkeley lane-splitting report and is frequently referenced as evidence that lane-splitting is safe (see To Lane- split or Not to Lane-split).  The authors note the primary limitation of the study is the lack of exposure data. “To estimate how the risk of being involved in a collision changes when motorcyclists chose to lane-split, we would require information on both the lane-splitting and non-lane-splitting riding that is done by some identifiable sample of motorcyclists. The collection of these data is fraught with problems, and the current study did not attempt to collect such data. The current data set cannot be used to compare the collision risks for lane-splitting or non-lane-splitting riders.”  The report also includes reference to the California Motorcycle Lane-Share Studies (surveys).

This is an abstract of a paper that presents a naturalistic study of motorcyclists’ behaviours during their commutes in the Paris region. The results concern firstly the description of the practice of lane splitting and its significance in their daily journeys. Secondly, the findings indicate the importance of perceptual activities in the participants’ riding behaviour.

This is the third survey initiated in 2012 and is designed to collect longitudinal information in a statewide statistically representative study of California motorcyclists and California drivers regarding their behavior and opinions on motorcycle lane-sharing on freeways and other multiple-lane roadways. Specifically, the anonymous survey collected data on opinions on motorcycle lane-sharing, its perceived legality and risks, and their personal driving perceptions and behaviors.

2013 – “Lane-filtering and Situation Awareness in Motorcyclists: An On-road Proof of Concept Study”

This study investigated the differences in situational awareness between motorcyclists who engage in lane-splitting and motorcyclists who do not “Overall, the analysis of shared and unique concepts suggests that motorcycle riders who filter tend to shed their focus on perceptions of surrounding hazards and traffic moving through or approaching the intersection to tasks associated with their own actions whilst moving to the front of the traffic queue.” In other words, the situational awareness of lane-splitters narrows dramatically to encompass only details pertaining to the goal of moving through traffic as quickly and strategically as possible. The result is that they are more vulnerable to crashing with other peripheral vehicles because they do not see them.

This is the second wave of an intercept study initiated in 2012 and designed to collect information for a statewide statistically representative study of California drivers and California motorcyclists regarding their behavior and opinions on motorcycle lane-sharing on freeways and other multiple-lane roadways.

The author of this report is James Ouellet, one of the original “Hurt Study” researchers.  The study examines contemporary data collected by monitoring freeway video cameras and simultaneous speed data at the camera location. It also examines 1976-77 data from the “Hurt Study.”   It compares the frequency of lane splitting motorcycles observed in moderate or heavy traffic to the frequency of motorcycles that crashed while splitting lanes. The report concludes that lane-splitting contributes little to the population of motorcycle accidents and eliminating a ban on lane splitting is unlikely to lead to an increase in motorcycle accidents.

This is the initial survey conducted on behalf of The California Office of Traffic Safety.  The objective of the survey was a statewide statistically representative of California drivers and California motorcyclists regarding their behavior and opinions on motorcycle lane sharing on freeways and other multiple lane roadways.

2012 – “Lane Sharing as a Motorcycle Safety Practice; A Further Evaluation”

These two articles by Steve Guderian were published in Motorcycle Consumer News.  The articles are position papers, advocating lane splitting.  Both are included here because they are sometimes referenced as research.  The first paper compared rear-end motorcycle crashes in California (which allows lane-splitting) with those in three other states, each with similar riding seasons and conditions (but without allowed lane-splitting).  Assuming the data presented is correct, readers are cautioned that the conclusion of the author (that the reason for fewer rear-end crashes in CA is due to the allowance of lane-splitting) may or may not be a correct conclusion. The second article addresses the author’s belief in the potential safety measure of lane sharing for motorcycle riders and includes a review of the data presented in “Motorcycle Lane Share Study Among California Motorcyclists and Drivers 2012.”

Motorcycle safety has proven to be a difficult traffic safety issue to address. Nationally, motorcycle-use fatalities increased each year between 2000 and 2008 even though total traffic fatalities were consistently decreasing after the year 2002. In 2009 there was a sharp decrease in the number of fatal motorcycle crashes in the US, and it is estimated there will be a decrease in 2010.

This report by the Oregon Department of Transportation examines the use of lane-sharing nationally and internationally and includes discussions on motorcycle and driver (auto) safety, and the potential benefits of lane-sharing. A review of literature relevant to lane-sharing revealed that research on the topic is limited. Benefits were often cited in motorcyclist advocacy publications and enthusiast articles. Quantitative data were limited and more generally related to capacity and emission benefits of motorcycles relative to cars. Relevant to the safety implications of lane-sharing, motorcycle crash causation studies provided the most direct information on lane-sharing. Studies, such as the 1981 Hurt report and the 2009 MAIDS report, considered lane-sharing as a causation factor.