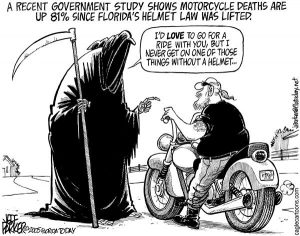 Motorcycle helmets are highly effective in protecting motorcycle riders’ heads in the event of a crash.  Assessing the extent of helmet use, changes in rider fatalities or different medical measures after the enactment of an all-rider helmet law or comparing states with and without all-rider laws, are examples of methods of assessing the effectiveness of such laws.

What happens when a state repeals an establish all-rider helmet use requirement?  This section focuses on the research related to repeal of all-rider laws.  As can be expected, the research indicates States that repeal an all-rider helmet law experience an immediate drop in helmet use – usually from above 90 percent to about 50 percent.  While more rigorous and complicated research is necessary to determine the impact of helmet law repeals on changes in rider fatalities or different medical measures (injury severity, length of intensive care unit stay, type/severity of neurologic injury, for example) the existing literature indicates that motorcyclist safety is severely compromised in the states that have repealed all-rider laws and that motorcyclist safety will be comprised should other states repeal their existing all-rider laws.

The data summarized in this document covers the ten-year period following the repeal of  Michigan’s all-rider helmet requirement. The data demonstrate the deadly impact of this change.  The organization which lobbied for the repeal claimed the change would (1) have no negative impact on rider deaths (2) produce a dramatic increase in motorcycle ownership/registrations and (3) result in an influx in out-of-state riders visiting Michigan. The 10-year post repeal data show all of these claims to be false.

This report utilizes police-reported crash data in Michigan from 2015 through 2019 to study motorcycle-involved crash trends. Data back to 2010 are used to explore motorcyclist helmet trends before and after the helmet law change in April of 2021.  Major findings include: helmet use dropped, operator’s w/o endorsements are less likely to wear a helmet, helmet use for young riders who were still required to wear a helmet dropped, risk of fatality for non-helmet wearers is 1.7 times the risk for wearers and fatality rates increased.  The law change has resulted in a per year increase of an average of 66 serious injuries and 20 fatalities.   Demographic data regarding motorcycle type,  weather conditions, road type, etc. is also provided.

Michigan repealed the all-rider helmet use law in April of 2012.  The negative impact of the repeal has been extensively researched.  This document sites this research and provides links to each of the referenced research reports.  In addition to this research, the MI data also document the tragic consequences of the repeal.

This is an abstract of the first study to demonstrate an increased rate of organ donation among unhelmeted motorcyclist fatalities compared to helmeted rider fatalities. Unhelmeted motorcyclists are three times more likely than helmeted riders to become organ donors, possibly due to the well documented increase in severe traumatic brain injuries in this population. From a public health perspective, helmets should be required for all motorcyclists.

2018 – “The Impact of the Repeal of Michigan’s Universal Helmet Law on Traumatic Brain Injury: A Statewide Analysis”

2016 – “The Impact of Michigan’s Partial Repeal of the Universal Motorcycle Helmet Law on Helmet Use, Fatalities, and Head Injuries”

Conducted by School of Medicine and the Transportation Research Institute of the University of Michigan, the objective of this research was to evaluate the impact of the partial repeal of Michigan’s universal motorcycle helmet law on helmet use, fatalities, and head injuries. The authors found Michigan’s partial universal helmet law repeal decreased helmet use and increased head injury among crash-involved motorcyclists. Furthermore, helmet nonuse doubled the odds of a fatality and tripled the odds of a head injury.

2016 – “Repeal of the Michigan Helmet Law: The Evolving Clinical Impact”

This research examined the impact of the repeal of Michigan’s 35-year mandatory helmet law in April 2012 on a level 1 trauma center.  A retrospective cohort study comparing the 7-month period before and the 3 motorcycle seasons after the helmet law repeal. This is the second published study (see Repeal of the Michigan Helmet Law: The Early Clinical Impacts - 2013) by this research team.  The authors concluded “the impact of the Michigan helmet law repeal continues to evolve. Three years after this legislative change, we are now observing increased injury severity score, higher in-patient mortality, and worse neurologic injury.”

This is the initial study (see Repeal of the Michigan Helmet Law: The Evolving Clinical Impact - 2016) evaluating the clinical impacts at a level one trauma center of the repeal of the Michigan helmet law. The study   highlights the negative ramifications of repealing a mandatory helmet law. Motorcyclists not wearing helmets increased significantly in a short period of time. Nonhelmeted motorcyclists more frequently died on the scene, spent more time in the intensive care unit, required longer ventilator support, and had higher medical costs.

This is a one-page chart describing the results of Analysis of Motorcycle Crashes in Michigan 2009-2013.

The goal of this analysis is to assess the consequences of the modification to the motorcycle helmet law that took effect on April 13, 2012, based on crash data from 2009-2013. The key areas of interest include: 1) changes in fatality and injury rates due to helmet non-use; 2) helmet use rates among crash-involved riders, especially those under 21; 3) out-of-state ridership, as it is seen in the crash data; 4) risk-taking behavior such as alcohol use and recklessness, as it relates to injury and fatality outcomes; and 5) motorcycle endorsements among crash-involved riders.  The research indicates helmet use drops for all riders, including young riders, out-of-state ridership is stable, risk for injury and death for nonhelmeted riders is significantly higher than for those who wear a helmet.

2012 – “Helmeted vs Nonhelmeted: A Retrospective Review of Outcomes From 2-Wheeled Vehicle Accidents at a Level 1 Trauma Center”

This study was conducted in Florida.  The findings suggest that the age and insurance exemption of the law should be revoked and a universal helmet law be reinstated in the state of Florida. Motorcycle helmets significantly reduce overall morbidity and mortality, improve discharge outcome, and are cost-effective in healthcare savings.

Abstract. The authors conclude repeal of the universal helmet law in Texas in 1997 has had a significant adverse effect on motorcyclist fatalities in Texas.

2007 – “Motorcycle Safety and the Repeal of Universal Helmet Laws”

This study assessed the implications for motorcyclist safety of recent repeals of universal helmet laws in 6 US states. The authors conclude on average, when compared to state experience with no helmet mandate, universal helmet laws were associated with an 11.1% reduction in motorcyclist fatality rates, whereas rates in states with partial coverage statutes were not statistically different from those with no helmet law. Furthermore, in the states in which recent repeals of universal coverage have been instituted, the motorcyclist fatality rate increased by an average of 12.2% over what would have been expected had universal coverage been maintained.

Based on the evidence evaluated in this study the increase in motorcycle fatalities that occurred after the Florida motorcycle helmet law was repealed is due in part to the reduced use of helmets. The analysis shows this is the case despite the pre-existing trend of increasing fatalities, the increase in fatalities associated with increased exposure (measured by registrations), the increase in fatalities that occurred in the first six months of 2000 (before the helmet law repeal became effective), and the likely contribution of a demographic shift in motorcycle ridership. This report also updates earlier analyses of the effects of law changes in Arkansas, Kentucky, Louisiana, and Texas. Comparing motorcyclist fatalities in the three full years after the law changes indicates that fatalities increased by 130 percent in Louisiana, by 99 percent in Kentucky, by 52 percent in Texas, and by 23 percent in Arkansas.

2000 – “Evaluation of Motorcycle Helmet Law Repeal in Arkansas and Texas”